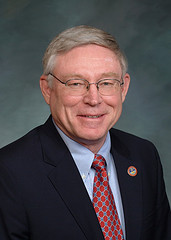 Former Representative Bob Gardner, R-Colorado Springs, co-sponsored several pieces of health care legislation during his four terms in the House.  Several of those championed policies for individuals with development and intellectual disabilities.

An attorney, Gardner is now running for the seat in Senate District 12 left vacant by Senator Bill Cadman’s departure due to term limits.  In an interview with Catherine Strode, Former Representative Gardner offers his view of the recent Supreme Court ruling on the Affordable Care Act and calls Republicans to action to create effective health care reform.

co-sponsored several pieces of health care legislation during his four terms in the House. Several of those championed policies for individuals with development and intellectual disabilities. An attorney, Gardner is now running for the seat in Senate District 12 left vacant by Senator Bill Cadman’s departure due to term limits. In an interview with Catherine Strode, Former Representative Gardner offers his view of the recent Supreme Court ruling on the Affordable Care Act and calls Republicans to action to create effective health care reform.

What is your opinion on the SCOTUS ruling?
“I believe Chief Justice Roberts stood the rules of statutory construction on their head in order to continue Obamacare and it’s really frustrating and disappointing to me. I opposed Obamacare and continue to oppose Obamacare and will continue to do so. I did sponsor legislation in 2013 that prevented a half a million Coloradans from losing their coverage altogether because of Obamacare. Some have tried to portray that as support for Obamacare. What I saw as being necessary was we had to align our health care mandates with the federal mandates. In order to be a qualifying policy under Obamacare, you had to have certain mandated coverages. Colorado had a more generous set of mandates than the federal government but they didn’t line up in any way. Those Colorado in state plans would not qualify for the health care subsidy. If you had one those policies, you could still be subject to the civil penalties. We had to do something, not because I approved of Obamacare, but because I was unwilling to see a half a million Coloradans have difficulty or perhaps even go without health care altogether.”

Do you foresee more challenges to the ACA?
“There may be more challenges in the legal arena but I think it’s pretty clear that the ACA is going to be upheld by the Supreme Court no matter what anyone does. If we’re going to do anything about it, we have to do it at the ballot box in 2016. It seems to me Republicans have a significant challenge being that the majority of the population dislikes Obamacare and dislikes it intensively. Our choices are these: we can decide that the Supreme Court has spoken and we’re going to wave a white flag. We can be doing what we’ve been doing (something that has frankly grown ineffective and tiresome) and that is introduce bills, do repeal maneuvers, talk about it. The third thing, which I believe is what we have to do, is talk about repeal of Obamacare and make a proposal to the American people that addresses affordability and patient choice. It is not going to be enough in this election cycle or in January of 2017 for Republicans to say, ‘Let’s just repeal Obamacare.’ The President is going to veto that. Unless we put something on his desk that is appreciably better, that addresses in a free market way health care affordability and patient choice, we’re going to be speaking in an echo chamber.”

What legislation do you think is needed in Colorado?
“One is the claims database. The problem is trying to create security around the patient information. We want patient data access to what it costs to have a particular procedure done. We don’t want that information to be vulnerable to someone hacking into patient data. We need to create this all claims database that makes it simple for us to measure outcomes and costs. I think a significant initiative for Colorado would be for the state to attempt to get a block waiver of its Medicaid program. That would change the landscape completely. Allow us to take control, free of Medicaid restrictions, to provide indigent health care in an effective way. The federal government is going to insist that we meet some minimum standards, as well they should. But there’s not a single person who deals with Medicaid that doesn’t say that it is wrong-headed, the regulations are a straitjacket, and the outcomes aren’t the best outcomes for the dollars spent.”

Do you see any signs that health care reform is working in Colorado?
“Not really. The input I get from health providers, and from insurance industry people, is we’re going to see huge cost increases across the country for the coming year. We’re seeing in Colorado the same problems that are happening everywhere else. We’re having increasing premiums. Who do we have on policies now? People who couldn’t get insurance before and badly needed it. They have driven the cost of the pool up. It’s good it’s available but what that has done to the cost model is disastrous. Submissions by insurance companies for rate increases next year run at 10, and in some cases, 40 and 50 per cent. I think there’s another crisis point coming around the first of the year for Obamacare and that’s going to be unfortunate. But it’s also going to create an opportunity for conservatives to put something on the table that works.”

Catherine Strode is Advocacy Denver’s Communications and Policy Specialist.  Formerly Coordinator of the Health Care Advocacy Program, she holds a Masters degree in Public Administration with an emphasis in Health Care Policy. Catherine publishes Policy Perspective, featuring interviews with state policy makers on issues that affect the work and mission of Advocacy Denver.