The Denver Metro Chamber of Commerce’s President and Chief Executive Officer, Kelly Brough, is weighing in on the economic impact of Colorado’s upcoming November ballot issues. She says the Chamber will campaign to defeat Amendment 69, which would make Colorado the only state in the nation to adopt a single payer health care system. In an interview with Catherine Strode, Kelly Brough discusses two other issues the Chamber would like to see on the ballot: creating a Hospital Enterprise Fund and bringing back a Presidential Primary. 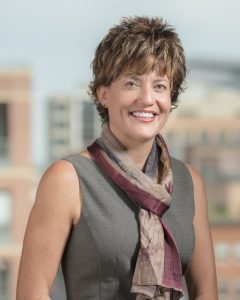 Why is the Chamber opposing Amendment 69?

“We look very carefully at ballot issues to understand the impact and the implication and to make sure we have very good information. When you look at this particular ballot issue, it’s very compelling why it would not work even if you might support single payer in the country.  For one, Colorado would go it alone.  The negative impact to Colorado by trying to go by itself is that we would be the only entity in the country that would be trying this experiment.  We’re not going to impact the nation’s health care costs or pharmaceutical costs by us shifting.  We think it could have adverse implications. People might come to the state to get coverage because you don’t have to be employed to be covered. Health care providers might very well leave the state to be reimbursed and to make their living in a state that has the current model, a market model. It’s governed by a 21 member elected Board with no requirements for expertise. They can’t even be recalled.  I’m not aware of any other elected official in Colorado that would fall under that.”

How does the Chamber view Amendment 69’s potential economic impact on Coloradans?

“It’s a 25 billion dollar tax increase. It recreates a government entity that is the size of our state government in one vote.  It’s taxed based solely from the income payroll; both the employer and the employee have to share in raising that 25 billion dollars. Taxes can be raised for this entity by a simple vote of members, not by taxpayers but by members. You become a member immediately upon moving into the state. When you add in Medicaid, if you put all of that under the system, it would be a 38 billion dollar entity.  That’s the size of a Fortune 100 company.  We think those kinds of experiments are way too risky for Colorado.”

Will the Chamber go back to the legislature next session for support of The Hospital Enterprise Fund?

“This is the second Session we proposed The Hospital Enterprise Fund, with a very large coalition. The coalition has elected officials from: local governments throughout Colorado, higher education leaders, business leaders, all coming together saying this makes sense for Colorado. That (Hospital Provider) Fee counts against the limit in TABOR; inappropriately, we would argue. Our recommendation was remove that Fee in a separate Fund, where it should be. When you do that, you keep hundreds of millions of dollars in that Fund that can be used to fund things like improvements to our roads and education. We’ll be the only state in the union who will put zero money into our Department of Transportation if we fail to do this.  We fund higher education 48th out of 50th in the country. It’s a huge mistake for us not to figure out how to fund those critical issues. We met with Coloradans in community meetings around the state; 90 per cent of Coloradans say you should absolutely take this action.  It’s hugely disappointing to not have our legislature come together to solve that issue.  A lot of people are looking to November to determine some of the things the legislature didn’t get done.”

What other issues does the Chamber support going to the ballot?

“I think we’ll have a very busy ballot because we’re going to have to depend on our voters to fix some of these things now. You’re going to see proposals for bringing back a presidential primary.  Even after all the challenges Colorado saw (we made national news in this regard) we still couldn’t reach agreement at the legislature to bring back the Presidential Primary.  I think you’re going to see opening those primaries to the degree that would allow unaffiliated voters to have easier access to voting in our primaries. We are strong supporters of making sure our unaffiliated independent voters have a stronger voice.  We think Coloradans should have a voice in the Presidential Primary and we should bring it back. We’d ask people to join us in slowing down amendments to our Constitution so we’re more thoughtful, and, we don’t hamstring future generations.  Finally, we’d ask Coloradans to join us so we defeat ColoradoCare and make sure Colorado continues to be a place where we can all thrive.”