Rob Schware co-founded the Give Back Yoga Foundation in 2007 with his yoga teacher Beryl Bender Birch. Formerly a Senior Portfolio Manager for the World Bank, he wanted to “give back” to the yoga instructors he had worked with over the years. Now entering its second decade, the Foundation provides yoga programs for: addiction and substance recovery, eating disorders, post-traumatic stress, cancer survivors, underserved populations, and for the incarcerated.

In an interview with Catherine Strode, Rob Schware says his vision has been to take yoga “off the mat” and out of the yoga studios. It is his belief that yoga can be used as a cost effective intervention for social problems nationwide.

What is the work of the Give Back Yoga Foundation? 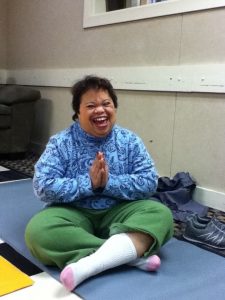 “Our mission is to support certified yoga teachers of all traditions who want to bring the teachings of yoga to underserved and under resourced socioeconomic segments of their community. Through this work we aim to inspire grassroots social change. The Foundation started in 2007 and we are now the world’s gateway for yoga service and a kick-starter for yoga service projects of all types and sizes. We also have five programs that we support at a deeper level. One is called “Eat, Breathe,Thrive” which is for individuals with eating disorders and have a negative body image. Another is Mindful Yoga Therapy, which helps veterans to calm their body and mind with training and books on yoga and mindfulness practices. There is another, Y12SR, which shares holistic tools for addiction recovery and relapse prevention. A fourth program is the Prison Yoga Project, which teaches incarcerated men and women impulse control and to reduce anxiety and aggression. Our last program is designed to help cancer survivors through the practices of yoga.”

What are the mental health benefits of yoga?

“People who have experienced trauma, and particularly people with post-traumatic stress, who practice yoga regularly report better sleep, improved focus and concentration, less anger and irritability, and just a greater overall sense or ability to enjoy life in the present moment. Those to me are the benefits in terms of mental health. Our programs are all either clinically tested or empirically informed. Together they form a comprehensive system that allows the populations we work with to carry on a life of strength and resilience.”

What is the Foundation’s long-term vision of serving vulnerable populations?

“The impulse when we started the Give Back Yoga Foundation was to support yoga teachers who wanted to bring this practice off the mat and out of their yoga studios. Our vision is for tens of thousands of yoga teachers and yoga therapists to bring their knowledge and skills to teach yoga to underserved and vulnerable populations. The body is built to move and it’s continuously both growing and deteriorating. We need to understand motion, and how it works, and movement in all stages of life and for any population. It’s only been in the past 100 years or so that exercise has been viewed as preventative to disease. In the past couple of decades exercise has been thoroughly studied as a proactive healing and life extending potential for people. I think we’re talking about the value of movement over rest and that’s been recognized in research as advantageous for serious diseases like arthritis, asthma, cancer, diabetes. That’s the 30,000 ft view of it. All people need to move. I love the quote by Maya Angelou “Nothing will work unless you do.”

Do you see an evolution in people’s acceptance of yoga as a mainstream therapy?

“There is no doubt in my mind that yoga and mindfulness programs are expanding and slowly becoming mainstreamed. This presents huge opportunity, that comes once in a generation, and yoga instructors need to seize upon it and take their yoga off their mats and into their communities.”